The Deluxe category rooms all have a story intertwined with the palace's ancient intrigues. They are all different from one another, we invite you to ask our staff about their story. All the basic equipment of the Eitch are in the room, but our customers choose them because they are embellished with some superb floral frescoes, some for the presence of the original panelling, witnesses of centuries of conspiracies of the Roman nobility, others with secret passages that they led out of the building to enter and exit the palace protected from prying eyes.

The history of the building is not only linked to the figure of Pope Innocent X Pamphilj, who wanted its construction, but also to Donna Olimpia Maidalchini, popularly known as "La Pimpaccia" who filled the seventeenth-century Roman chronicles with her extravagant personality.

Ambitious, she went from her modest origins to the Roman patriciate, marrying Pamphilio, brother of the future Pope. He dedicated his life to Innocent X whom she maneuvered, together with the Holy Court as she pleased, going down in history as "The Papess".

Heedless of the gossips, who called her the Pope's lover, she exploited her privileged position throughout her existence by amassing wealth with cunning, threats and subterfuge. Despite her bad reputation, she should be recognised for the important role she played in the Pamphilj factories, so much so that tradition wants her to direct the construction of the building where the Eitch Borromini is located today. If you appreciate your room, you now know who to credit some of the merit. 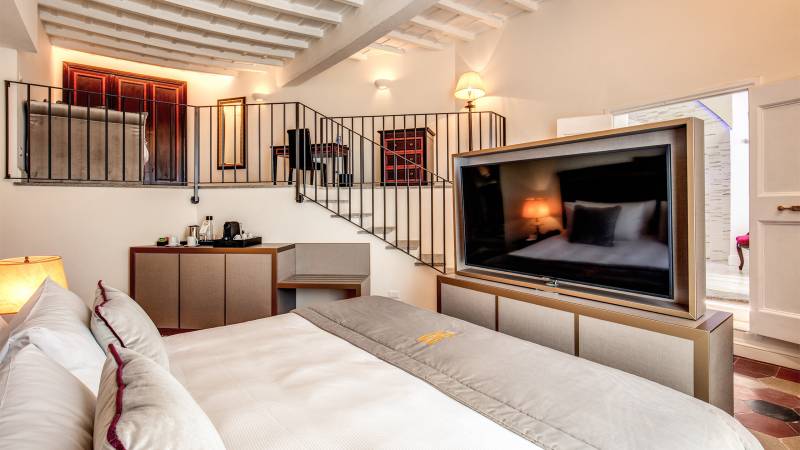 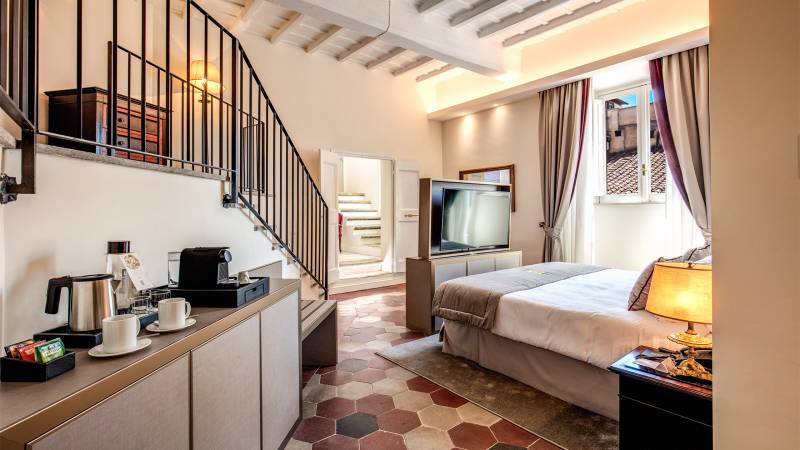 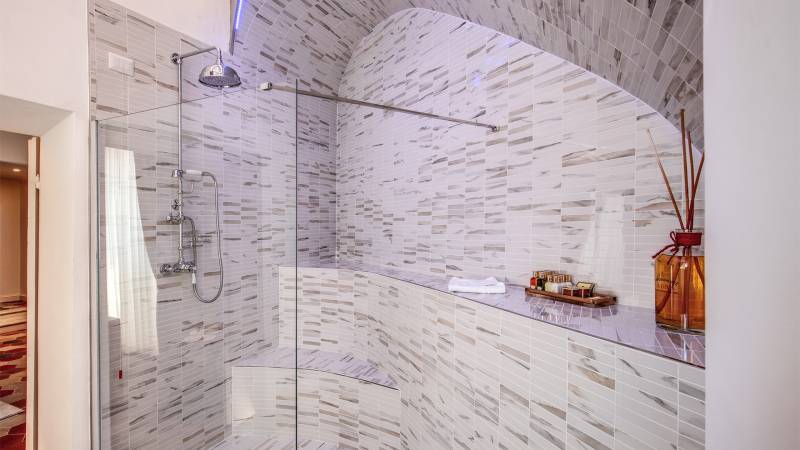 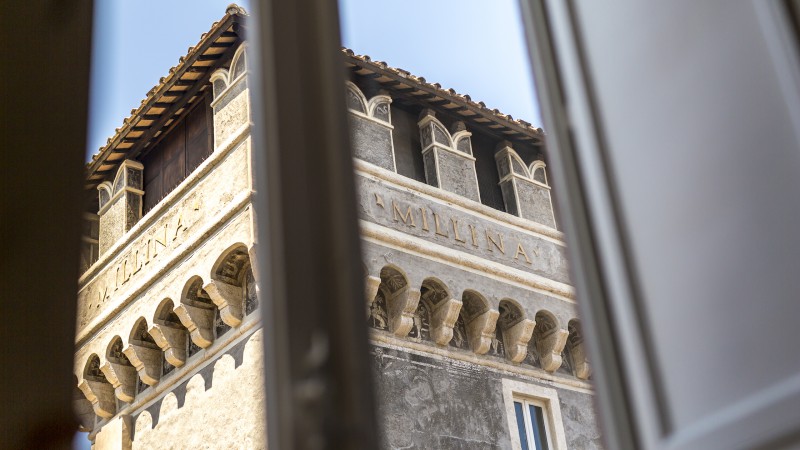 Minibar with assorted products and snacks

Safe for laptops and personal documents 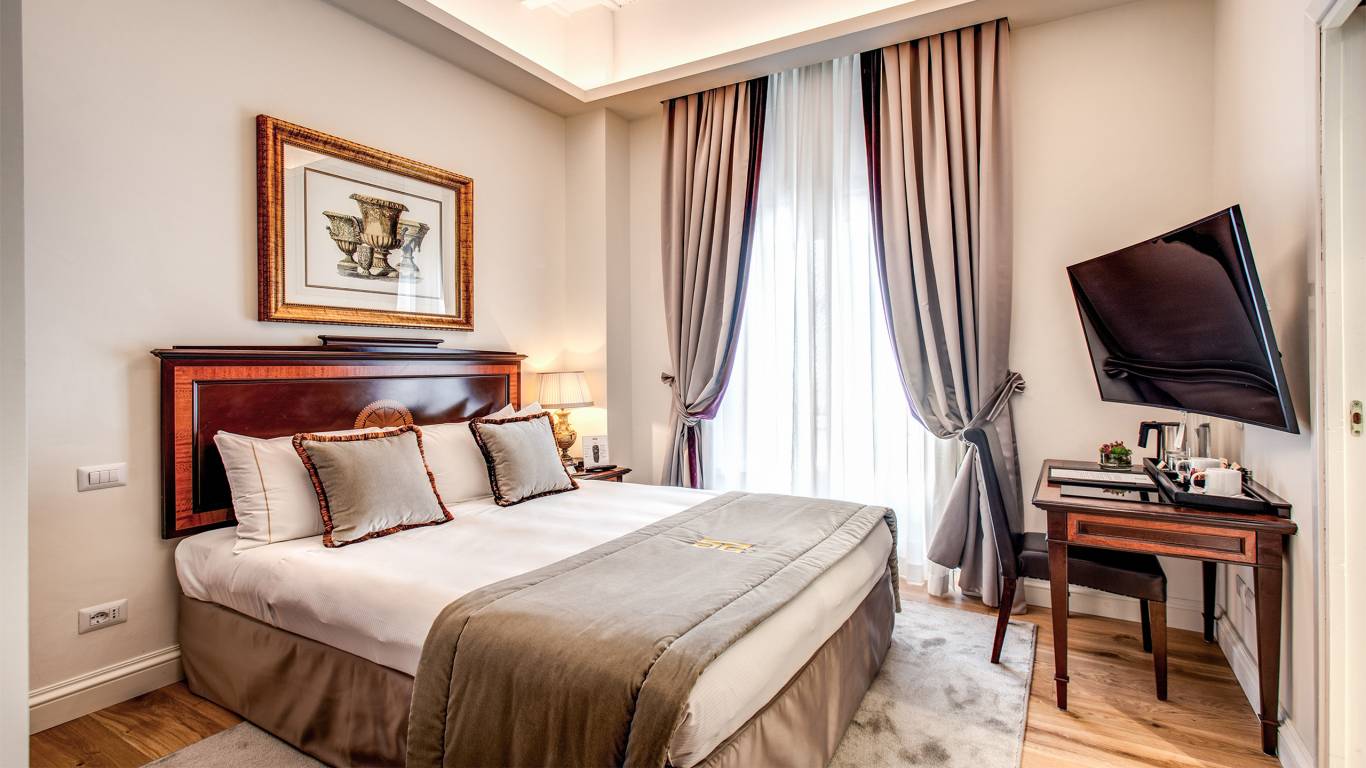 The rooms, located on the third floor, are ideal for solo travellers looking for every comfort they need for a quick stay in the Eternal City. [...] 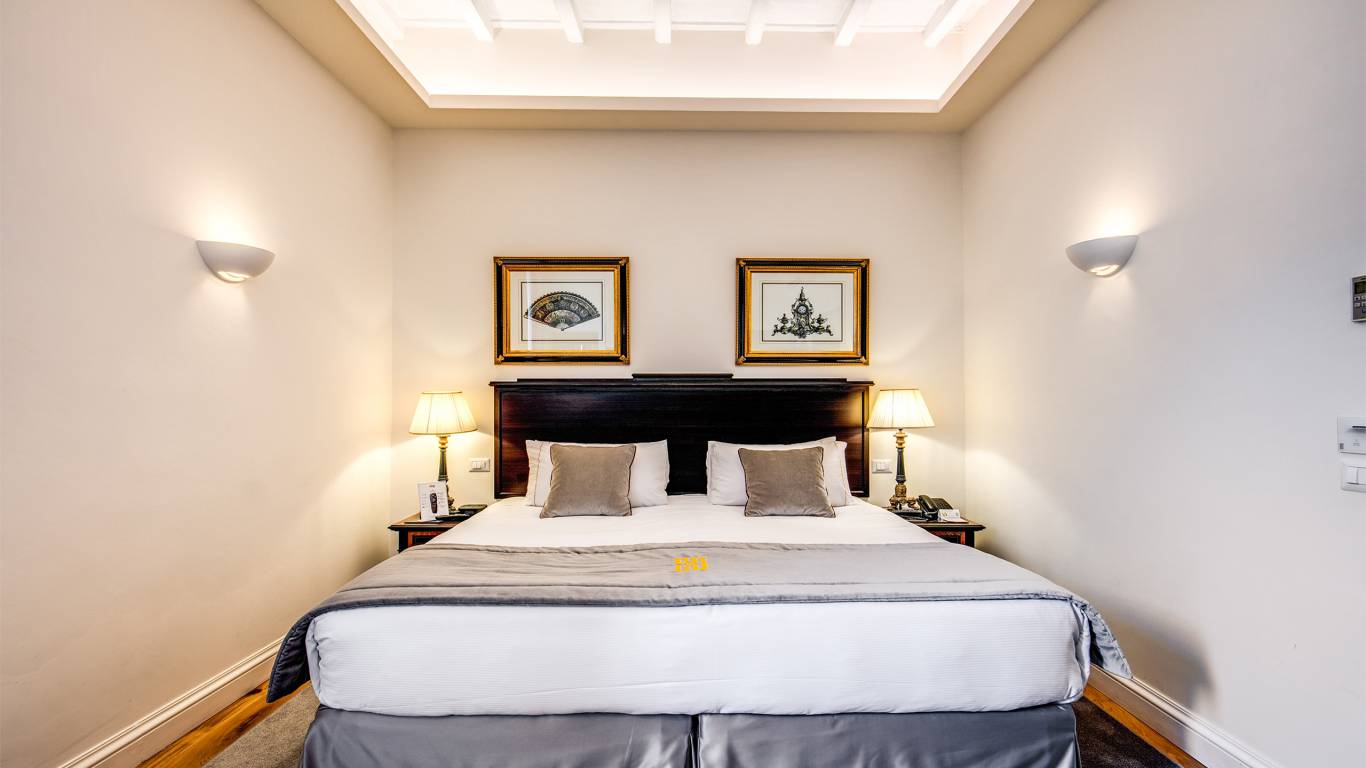 Large and bright double room equipped with an extra-comfort bed and furnished with an attention to detail. The original flooring makes the environment suggestive and in keeping with the building's century-old history. [...] 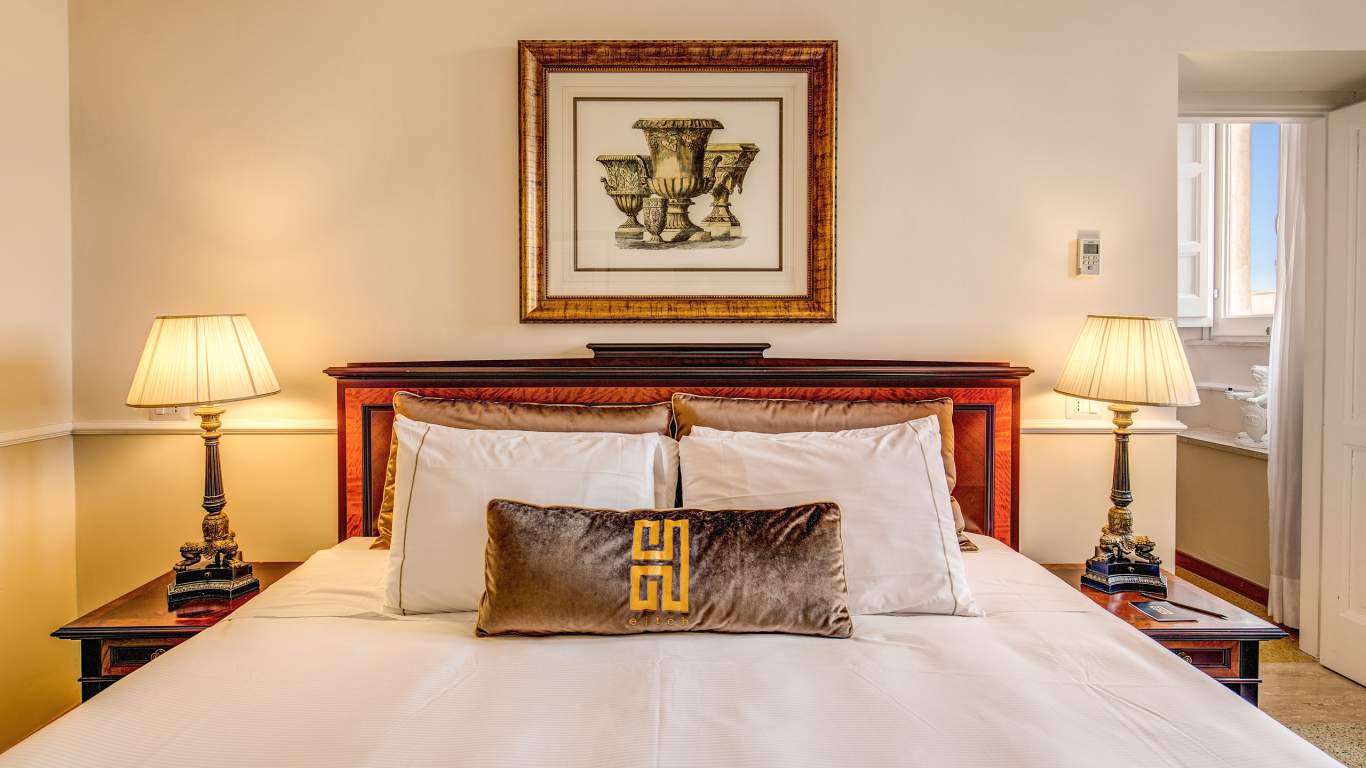 Inside the Superior Suites we find different parts of the original furnishings of the building that houses the Eitch, designed by Francesco Borromini, one of the most important and extravagant artists of the Roman Baroque. [...] 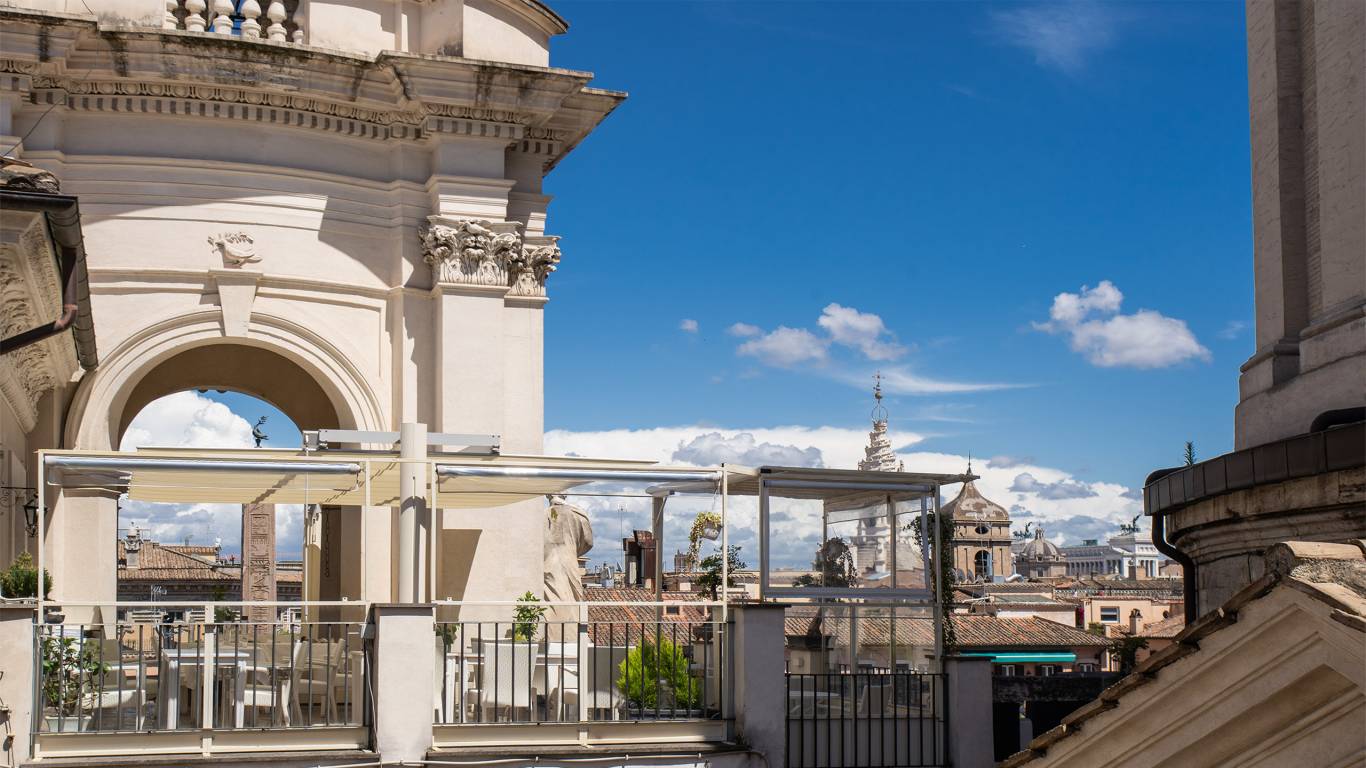 The only rooms in this category of the entire building are two large suites located on the fourth floor overlooking the dome of Saint Peter’s or the bell tower of Sant'Ivo alla Sapienza, dedicated respectively to the Doria family and Saint Eugenia. [...] 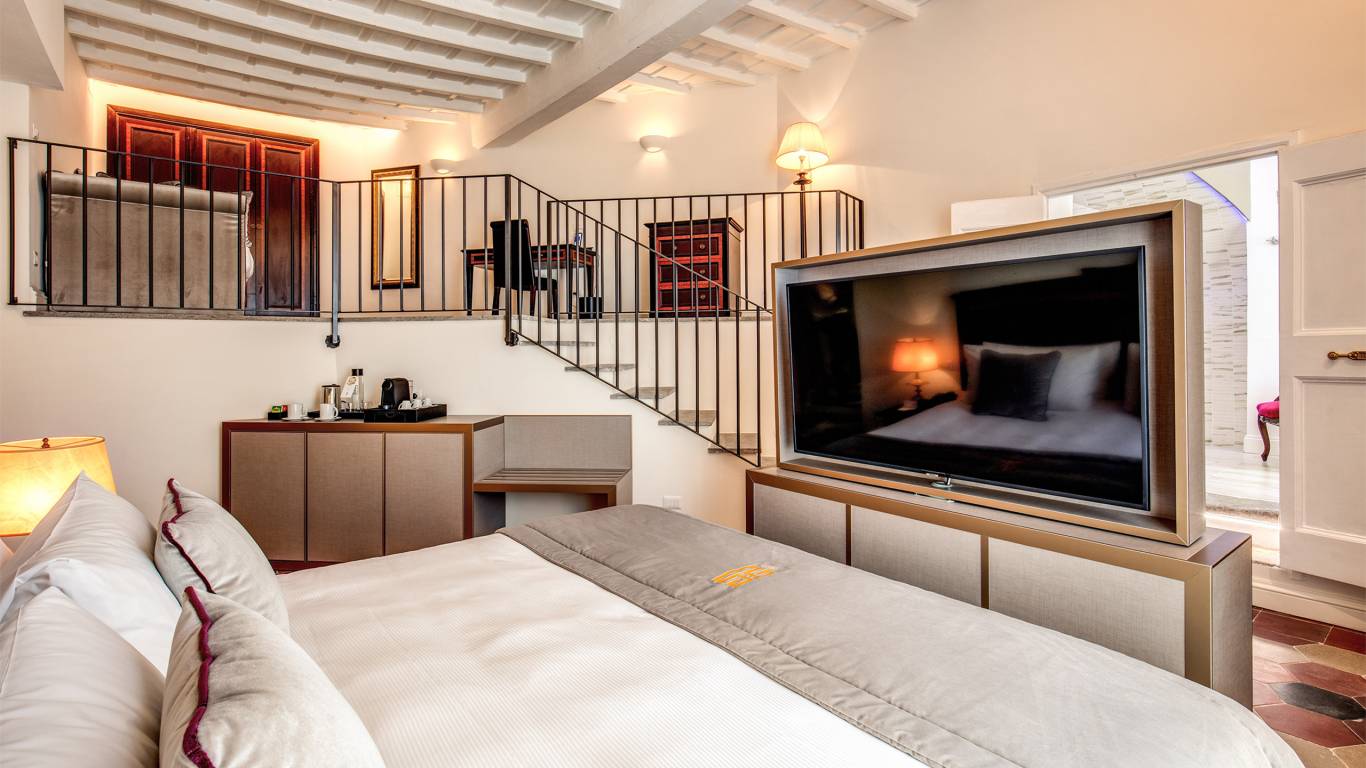 The Deluxe category rooms all have a story intertwined with the palace's ancient intrigues. They are all different from one another, we invite you to ask our staff about their story. [...] 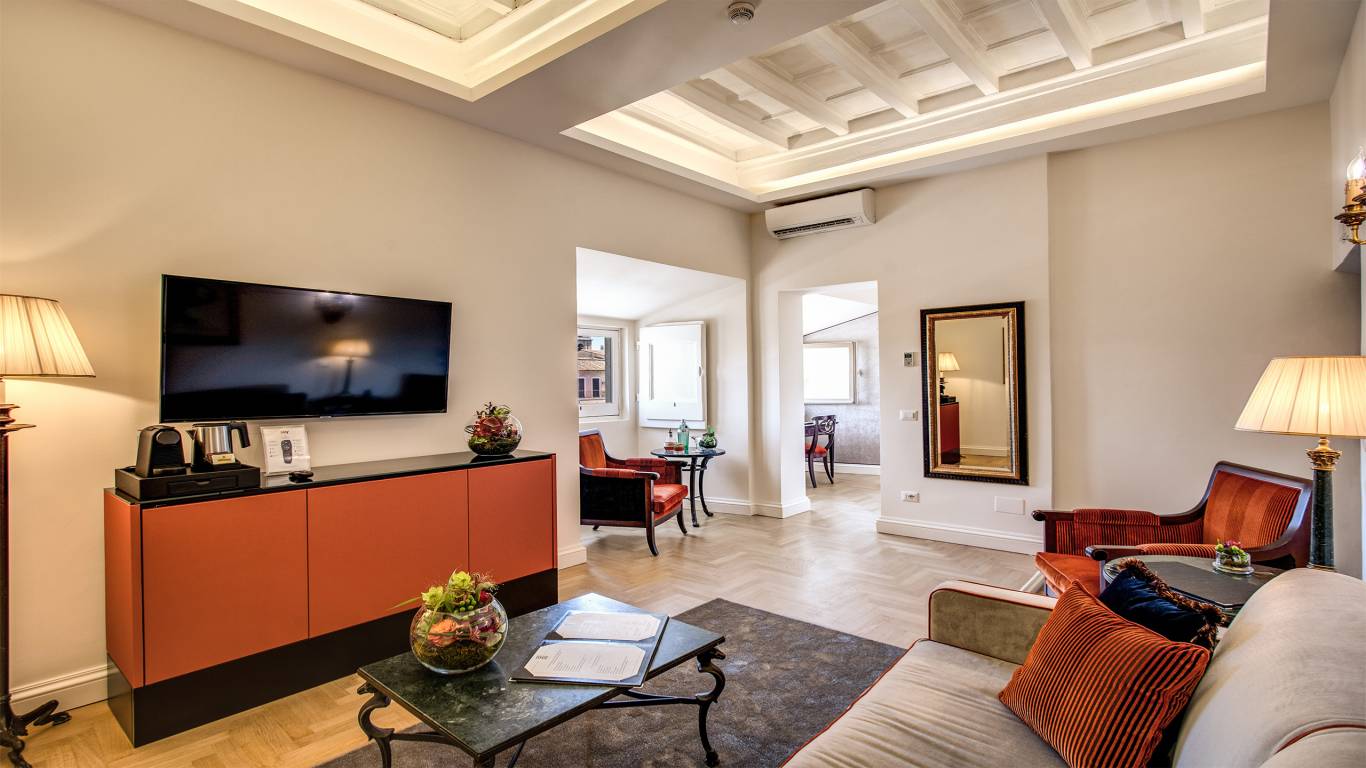 Superbly furnished suites with all the characteristics of the category that precedes them but enhanced by the view of one or more corners of the eternal city. [...] 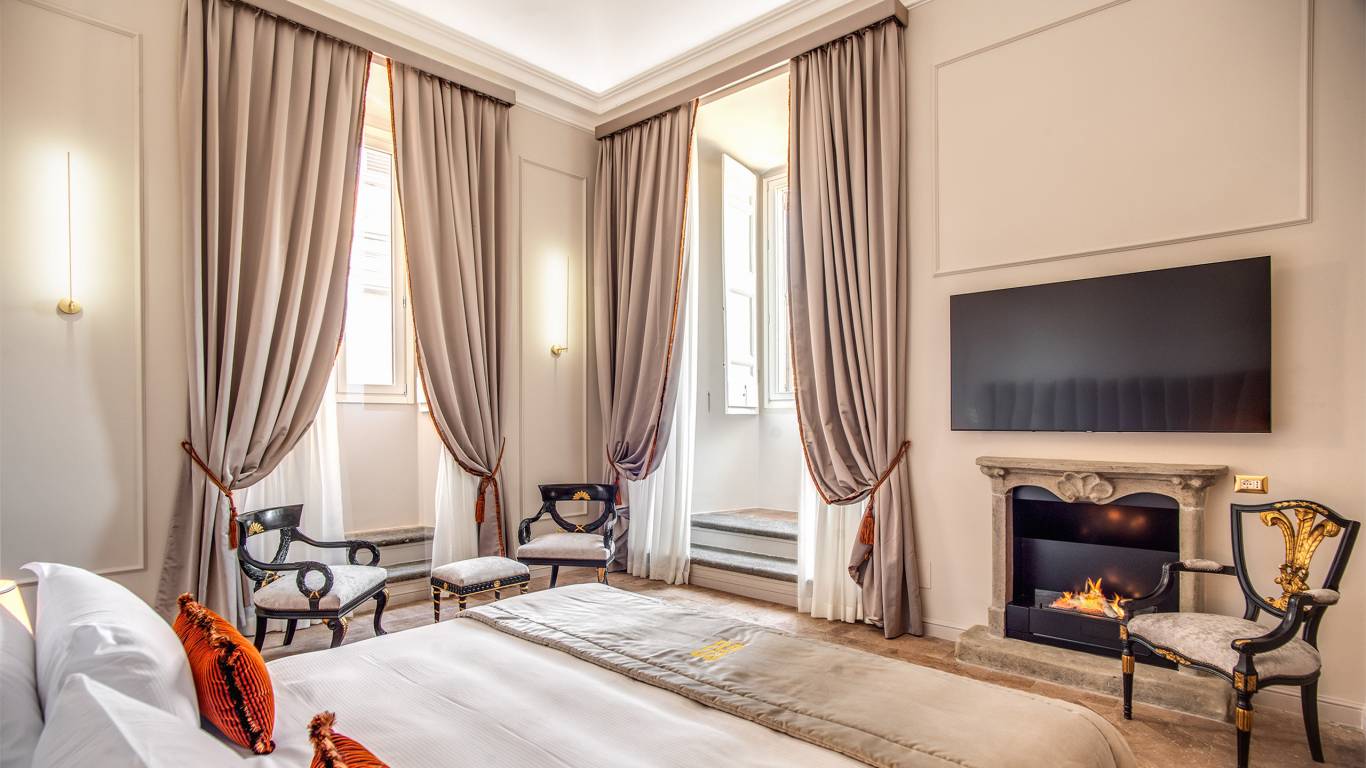 They are the most prestigious rooms in the building that hosts us, also called the Innocentian College, the one that contributed to making Piazza Navona the so-called "Pamphilj Island", a magnificent testimony of Baroque architecture and the power of the family. [...]